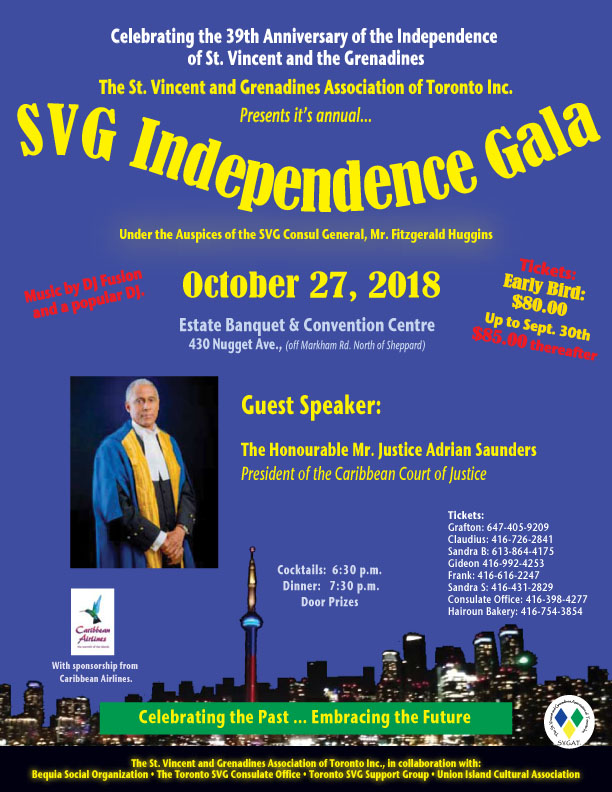 In celebration of the 39th Anniversary of St Vincent & the Grenadines’ Independence, the St Vincent and Grenadines Association of Toronto Inc, presents its annual SVG Independence Gala. Hosted under the auspices of SVG Consul General Mr.Fitzgerald Huggins, the Gala will be held on Saturday October 27, 2018 at the Estate Banquet & Convention Centre, 430 Nugget Avenue, Scarborough, beginning at 6:30 pm.

The Honourable Justice Adrian Saunders, President of the Caribbean Court of Justice, will be the Gala’s Guest Speaker. Justice Saunders is a native of St. Vincent and the Grenadines. He holds a Bachelor of Laws degree from the University of the West Indies (Cave Hill) and a Legal Education Certificate from the Hugh Wooding Law School in Trinidad & Tobago in 1977.

The Honourable Mr. Justice Saunders joined the Eastern Caribbean Supreme Court (ECSC) High Court Bench in 1996, after 19 years of private practice. On May 1, 2003 he was appointed to the ECSC’s Court of Appeal and served as acting Chief Justice between 2004 and 2005. Justice Saunders was among the first cohort of judges to join the CCJ bench in 2005, before elevating to the office of Court President on July 4, 2018.

Tickets for the October 27 Annual SVG Independence Gala will be $85 at the door. Music will be provided by DJ Fusion and other popular deejays.