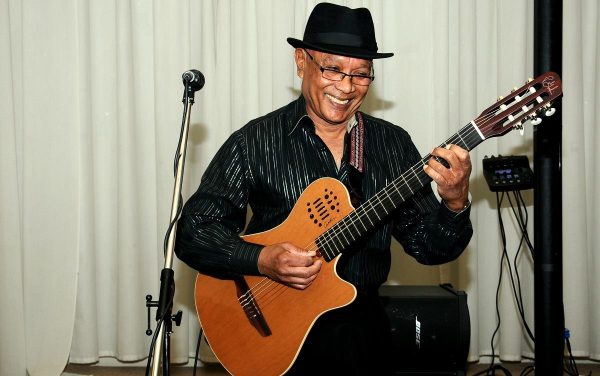 In 1995 after an extended run as Band Leader for Odyssey, Raymond “Chinny” Lee-own took a self imposed break from Canada and went to Jamaica for a year. Having been refreshed by the Caribbean’s warmth, he then came back to Canada with the decided intention of having a much smaller band than Odyssey had been. The combination of himself and two other musicians, Victor Shim and Michael Fisher, thus led to the initial formation of Triple Play. Aside from its trio composition the band’s name Triple Play derived from the baseball terminology, signifying a play of three parts.

Triple Play’s formation for any given booking has however always been flexible. Dependent upon the gig, the venue and/or the specified wishes of whoever’s doing the hiring, the base trio has often been increased to include one, two at times even three additional members. The latter often occurring with ever increasing frequency within recent times, as a result of requests being received for the inclusion of the band’s brass section.

Triple Play’s initial existence was as the house band for the Sheraton Parkway Hotel, which back then was located at Hwy 7 and Don Valley. The band played there every Thursday, Friday and Sunday. Triple Play also performed at several other Canadian owned bars to the extent that it was initially perceived to be simply a “bar band!”

Triple Play’s evolution as a Guyanese-Canadian community band however began somewhat inauspiciously. The initial sources were occasional bookings from members of the Community who had heard the trio’s Sheraton’s performances and wanted to have them play at their own functions. Those sporadic bookings from individuals soon became a steady flow of constant requests for the band to perform at much larger community functions.

Guyana Christian Charities (GCC) was one of the very first Community organizations to have started making Triple Play bookings. Triple Play’s popularity with GCC members has remained intact until today, as evidenced by its presence at many of the Charities’ annual functions within recent years.

Needless to say, the constant requests that were being received for community organization event performances necessitated significant changes in Triple Play’s repertoire. From playing predominantly R&B, disco and Top 40 hit tunes for its Canadian bar audiences, it soon found itself immersed in an ever increasing diet of soca, reggae and of course given the largely Guyanese-Canadian audience composition slow dance oldies!

Today’s Triple Play, which has since evolved in its most recent version to be arguably now the most popular and best sounding of all the existing Community bands, is however now completely different from its predecessor. Triple Play’s, Version 2 lead singer was a “Soca’Reggae Specialist,” which was somewhat restricting on the band’s versatility. His eventual departure subsequently led to Chinny’s acquisition of Triple Play’s current lead singer, the very versatile St Lucian born, Lance Charlemagne.

Lance’s background had been that of a Cruise Ship “performer,” which was exactly what Chinny wanted. A lead singer who could perform the tunes the band would play, as opposed to merely singing them.

With Lance Charlemagne as its lead singer, Triple Play’s current day performances are now much more reminiscent of those of the much larger Odyssey, which had always been regarded as a “show band.” Back in its heyday, the then very popular Odyssey would actually perform two shows nightly, a North American set, followed by that which was authentically Caribbean.

Through its current composition of a three man core, boosted occasionally by the on demand addition of its horn section, Chinny has in Triple Play Version New, finally acquired what he’s actually been in search of for well over two decades! A much smaller unit capable of providing show band performances of tunes of any genre, from the Canadian mainstream popular top 40 and R&B hits to the Caribbean soca, reggae and oldies favorites. The New Triple Play now does it all and then some.

From one event booking to the next, contrary to most other bands, the New Triple Play interestingly enough does not play from any set play list. The members are sufficiently familiar with each of the tunes in its entire repertoire as to allow Chinny to simple call tunes based on his perceived reading of the audience in question’s likely enjoyment. The band now therefore plays to the crowd. 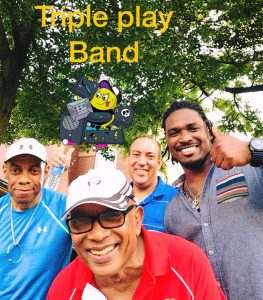 Since its first public outing last May, appropriately at the Guyana Christian Charities Spring Dance, the New Triple Play has since then taken the community by storm. Word of the band’s new sound has begun to spread and its forthcoming New Year’s Eve Dinner & Dance has suddenly become the hottest ticket in town. 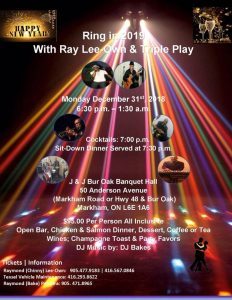 Triple Play’s 2018 New Year’s Eve Gala will be held on Monday December 31 at the J&J Bur Oak Banquet Hall, 50 Anderson Avenue, off Markham Rd (Hwy 48) and Bur Oak. The All Inclusive, Open Bar Gala Evening’s entertainment, which includes a three course, chicken and salmon dinner, a midnight champagne toast and party favors, will get under way with cocktails at 7:00 pm. The Sit-Down Dinner will be served promptly at 7:00 pm. Tickets for the evening which will also feature the ever popular tracks of DJ Bakes are $95.00 per person.

Triple Play’s newfound versatility is also now being reflected in an evolving following which is far more reflective of a wider cross section of the Community. Charlemagne himself has brought members of the St Lucian community as well as many of his mainstream associates, some from as far away as Oakland. As a result of its new sound, Triple Play has also started to attract a more younger crowd. As result Triple Plays’ performances since May have been to audiences that have been quite mixed. Party goers reflective of the young, more mature, Guyanese, Caribbean and mainstream have all delightfully been enjoying Triple Play’s provision of high quality dance irresistible music.

In addition to the Community dances Triple Play also plays regularly at the Mansion in Markham and Scarborough’s Spade. Chinny’s plan for 2019 will be to also get back to the Canadian circuit with performances at mainstream bars.

As a result of it’s new and improved sound, Triple Play has not surprisingly begun to receive increased bookings from individuals and organizations alike, all anxious to take advantage of its ever increasing popularity. As far back as this past August Triple Play had been booked to perform at the January 2019 Annual Bishop’s High- Queen’s College Toronto Alumni's 12th Night Dinner & Dance.

Buoyed by the support of his wife Yvette and children Justin and Brittney, Raymond Chinny Lee-own now finds himself enjoying life in a manner most others would envy. For one, he is his own boss at a “job” that simply requires him to do what he loves best, play music for others, Secondly, his band is now sounding as good, arguably better, as it ever has, which is creating such a constant demand for its services as to allow him the luxury of being able to pick and choose where and when he wants to play. Finally his beckoning challenge in the forthcoming new year will be to embark upon a quest to re-conquer, this time with his band, the very Canadian mainstream entertainment club scene that had been his haunting ground as a solo performer, when he first started playing music in Canada.

To be enjoying all that is ultimately quite in three words: “a triple play!”

The Raymond “Chinny” Lee -own led New Triple Play, seemingly now bent on taking not only the Community by storm, but perhaps even the Greater Toronto also!

Scotiabank Selling Off Its Caribbean Branches!