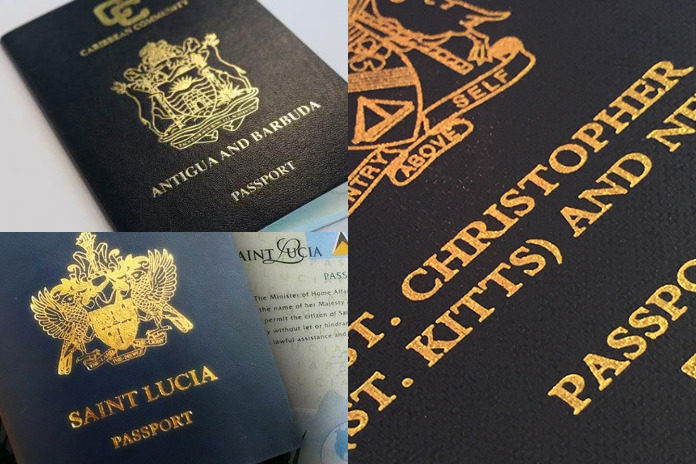 In the latest ranking of passport power and global mobility, which is based on exclusive data from the International Air Transport Association (IATA) St Kitts and Nevis, Antigua and Barbuda, and Saint Lucia are featured in the top five spots, among the Organisation of Eastern Caribbean States (OECS), member States.

St Kitts and Nevis held onto the top spot on the Index, with a visa-free/visa-on-arrival score of 152, and 26 worldwide in terms of its passport’s strength.  The island gain visa-free access to Serbia, while losing visa-on-arrival access to Djibouti and Benin due to the adoption of an e-visa policy in these territories.

Moving into the third quarter of 2019, Antigua and Barbuda captured the second spot in the OECS, on the Index, with a visa-free/visa-on-arrival score of 147. The twin-island ranks 29 globally while losing visa-on-arrival access to Djibouti and Benin due to the adoption of an e-visa policy in these territories.

Saint Lucia captured the fourth spot in the OECS, on the Henley Passport Index, with a visa-free/visa-on-arrival score of 144. A move one rank up from the Q2, due to movements higher up on the index.

“With the recent Q3 ranking, we are assured that Antigua & Barbuda’s passport is highly sort after, which translates to better investment opportunities for our twin island nation”

“ The people of Saint Lucia remain confident in the power of the Saint Lucian passport. Henley & Partners will continue to work closely with the government of Saint Lucia to ensure that the passport maintains its high standard and attractiveness.

“ With the recent Q3 ranking, we are assured that Saint Lucia’s passport is highly sort after, which means the island can benefit from a better bargaining power, with potential investors”

Political science researchers Uğur Altundal and Ömer Zarpli, of Syracuse University and the University of Pittsburgh respectively, have found that there is a link between visa-openness and progressive reform, and that a country’s ranking on the index reveals far more than simply the number of destinations its holders are able to access.

Altundal and Zarpli’s unique research shows that even short-term travel mobility, which represents 85 percent of all cross-border movements, can positively influence political liberalization and democratization. Conversely, countries moving towards nationalist isolationism and away from policies that encourage visa-openness are likely to drop in the Henley Passport Index rankings and incur geopolitical consequences for themselves and their neighbors.

Altundal and Zarpli observe that “the prospect of visa-waiver agreements with the EU has encouraged neighboring countries to adopt important reforms in areas such as civil and political rights, rule of law, and security,” and note that freedom of movement appears to be a vital pre-condition not only for economic growth, but also for social integration and progressive political change.

With nationalism on the rise, and global powerhouses like the UK and the US embracing policies that limit freedom of movement, this new research indicates that associated impacts on political rights, rule of law, security and democracy could be profound.

“With a few notable exceptions, the latest rankings from the Henley Passport Index show that countries around the world increasingly view visa-openness as crucial to economic and social progress. Discussions of passport power and global mobility tend to focus on the benefits for the countries with the strongest passports.

“However, this latest unique research appears to confirm something that many of us already knew intuitively: that increased visa-openness benefits the entire global community and not just the strongest countries,” said Dr Christian H. Kaelin, chairman of Henley & Partners and the creator of the passport index concept.