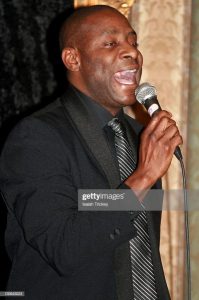 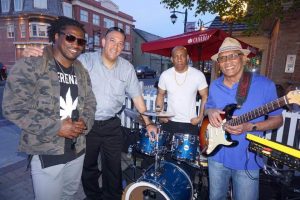 Attendees to the Raymond “Chinny” Lee-own led Triple Play Annual Caribana Sunday Dance, which will be held on August 4 at the Pickering Community Center, will be in for a treat of musical delights. That much has been guaranteed by the performing presence of George St Kitts, the outstanding Guyanese-born vocalist and recording artiste whose dexterity has made him an outstanding favorite of all who have ever heard him sing.

Chinny and George’s association goes back a long time, in fact now almost forty years. It was in 1981 that George St Kitts came to Canada from his native Guyana and almost immediately hooked up with Raymond “Chinny” Lee-own, as a fellow Guyanese musician.

George had enjoyed an extensive, four year, career in Guyana as a front line singer for Sid & The Slickers, one of the country’s most popular and internationally famous live bands. He’d shared the spotlight as Sid & The Slickers frontline vocalist with Pamela Maynard, easily one of the finest female vocalists Guyana has ever produced.

George was introduced to Chinny by another Guyanese male singer stalwart, none other than the legendary Aubrey Mann. George and Aubrey had a Canadian association with each other having worked together on a show themed Reflections, which was held at the Bluenote, another one of the Canadian Caribbean community’s infamous nightclubs.

At the time of his introduction to George St Kitts, Chinny was totally immersed in establishing his then musical ensemble Odyssey as one of the Canadian Caribbean Community’s most active live bands. Based on Aubrey Mann’s highly favorable recommendation, along with Chinny’s instantaneous appreciation of George’s vocal talents he was quickly accepted as one of Odyssey’s front line singers.

St Kitts spent a few years with Odyssey, performing at clubs throughout Ontario in between weekend gigs at such well established Caribbean owned entertainment spots as Carib and Cutty’s Hideaway. Odyssey’s popularity back in those days, particularly within the Guyanese-Canadian community but well beyond also, was unrivalled. George St Kitt’s vocal dexterity as one of its front line singers was a main contributor to Odysseys’ widespread popularity.

It was that very dexterity that allowed St Kitts to branch out on his own, post Odyssey during the early 90’s. He recorded some solo albums, one of which was good enough to win him a Juno nomination. His self produced “Never Stop” won him the 1993 Juno nomination for the Best R&B Album.

St Kitts also earned himself a second Juno nomination for a follow up album but the failure of not having won the actual award for either, creatively sent him in a somewhat different direction. During the late nineties and into the early 2000’s George’s outstanding versatility took him further afield to engagements in Broadway Theatre. He was recruited to perform in Ed Mirvish’s production of the Lion King, which ran at the Toronto Alexzander Theatre from 2001-2003.

After the Lion King stint had ended, George began concentrating less on actual recordings and far more on the production of live shows to the extent that he very quickly became popular within the wedding entertainment circuit. Sounds of Motown and Prideland are among some of the outstanding shows that St Kitts has produced since the realization had dawned upon him that being in the recording studio wasn’t actually his thing! The music of the Lion King and his affinity to a South African genre had instilled in him the desire to become more actively involved in production of shows that would allow him to display that type of diversity.

Having had such a varied and outstanding career as a performing artiste, George St Kitts has for the past two years been busying himself producing shows for several bands, including his own. His is still very much enjoying doing what he does best, producing music for himself and others.

Now that he has reconnected with Chinny and will be performing at Triple Play’s August 4, 2019 Caribana Sunday Dance at the Pickering Community Center, George is very excited. His plans are to drop tunes in a wide variety of genre’s including Reggae, R&B, Soul that will allow all those present an opportunity to full appreciate his outstanding versatility. Sounds very much like treat that no serious music loving partygoer would ever want to miss.

Kholi To Lead India On Caribbean Tour, Dhoni Opts Out!