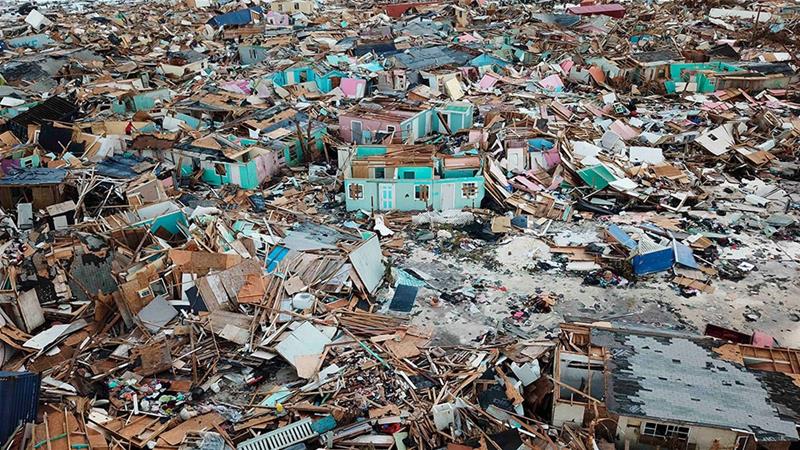 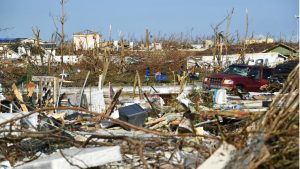 Hurricane Dorian was an extremely powerful, long-lived, and destructive tropical cyclone that devastated the northwestern Bahamas and caused significant damage to the Southeastern United States and Atlantic Canada. It was the fifth tropical cyclone, fourth named storm, second hurricane, and the first major hurricane of the 2019 Atlantic hurricane season. The hurricane caused catastrophic damage to Grand Bahama and the Abaco Islands, with at least 70,000 people left homeless.

Dorian developed from a tropical wave on August 24 in the Central Atlantic. The system gradually intensified while moving toward the Lesser Antilles, before becoming a hurricane on August 28. Rapid intensification ensued, and on August 31, Dorian intensified into a Category 4 major hurricane. On the following day, Dorian reached Category 5 intensity, peaking with one-minute sustained winds of 185 mph (295 km/h) and a minimum central pressure of 910 millibars (26.87 inHg), before making landfall in the Bahamas in Elbow Cay.

Dorian slightly weakened and made another landfall on Grand Bahama several hours later. After moving over the Bahamas, Dorian slowed its forward motion considerably, remaining essentially stationary just north of Grand Bahama Island from September 1 to September 3, after the ridge of high pressure steering Dorian westward collapsed on September 2. Shortly afterward, a combination of cold water upwellingand an eyewall replacement cycle weakened Dorian to a Category 2 hurricane by September 3. Later that day, Dorian began moving northwestward, parallel to the east coast of Florida.

On September 5, Dorian moved over warmer waters and completed its eyewall replacement cycle, reintensifying into a Category 3 hurricane. Several hours later, Dorian encountered strong wind shear, weakening the storm to Category 1 status by the next day, while the storm turned to the northeast.

Hurricane Dorian practically parked over the Bahamas for over a day and a half, pounding away at the islands in a watery onslaught that devastated thousands of homes, trapped people in attics and crippled hospitals. At least thirty deaths were reported, with the full extent of the damage far from clear.

The storm’s relentless winds and torrential rain battered the islands of Abaco and Grand Bahama, which have a combined population of about 70,000 and are known for their marinas, golf courses and all-inclusive resorts. The Grand Bahama airport was under 6 feet (2 metres ) of water. Prime Minister Hubert Minnis called it “a historic tragedy.”

Red Cross spokesman Matthew Cochrane said more than 13,000 houses, or about 45% of the homes in Grand Bahama and Abaco, were believed to have been severely damaged or destroyed. U.N. officials said more than 60,000 people on the hard-hit islands will be left in need food, and the Red Cross said some 62,000 will need clean drinking water.