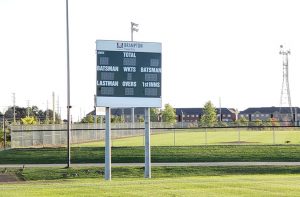 Already assured of a state-of-the-art stadium through the initiative of the Mayor and City Council of Brampton, the Brampton Etobicoke District Cricket League (BEDCL) has been further boosted with the introduction of its first LED-lit full-size cricket field.

Teramoto Park, located on Chinguacousy Road, now has nighttime LED lighting that covers the entire field. It also has upgraded spectator seating for all the cricket-lovers in the city. According to BEDCL president Praimp Persaud, the park will soon feature a digital scoreboard, which is to be installed to enhance the unique cricket site.

The Guyanese-born Persaud also boasted that with all the upgrades, Brampton is now in a position to host more competitive cricket tournaments.

Persaud described the installation of the lights as a major milestone for the hosts of the 2019 Global T20 cricket tournament and the fulfilment of a promise from Mayor Patrick Brown. “He has kept his word and all his promises with respect to getting cricket to the next level in our city. He has stood true to his commitments without anyone having to remind him.”

Persaud pointed out that “cricket is now one of the mainstream sports in our city and is on the same level when discussing plans for all sports. It is no longer on the lowest tier.

“Thanks Mayor Brown for all that you and council have done and continue to do for the sport of cricket, one of the fastest growing sport in Brampton and Canada.”

In a Facebook post, Mayor Brown described cricket as a highly popular sport in Brampton. “We are leading the way with the most cricket fields per capita in Ontario and throughout Canada.”

Speaking from the Teramoto Park, Mayor Brown said he was there to share the exciting news.

The mayor disclosed that the cricket-only field now has LED lighting that covers the entire field – the first of its kind for a full-size cricket field in Canada.

“This field also has upgraded spectacular seating and a digital scoreboard will soon be installed to enhance this unique cricket site.

“This means we can host more competitive cricket tournaments in Brampton. We are working on other cricket upgrades across your city. Brampton truly is the cricket capital of Canada.”

Meanwhile, the city has also built a new full-size cricket field at the 407/Dixie Park to provide players with an enhanced experience while another one at Gore Meadows Community is almost completed. The site will boast two more cricket fields with turf wickets including one with stadium-style seating and a clubhouse with lighting.

These additions are a direct result of Brown being elected mayor following the 2018 Municipal elections. The major concerns were the lack of lighting, which restricted practices and tournaments to be held only during the day and for better infrastructure to allow the sport to grow.