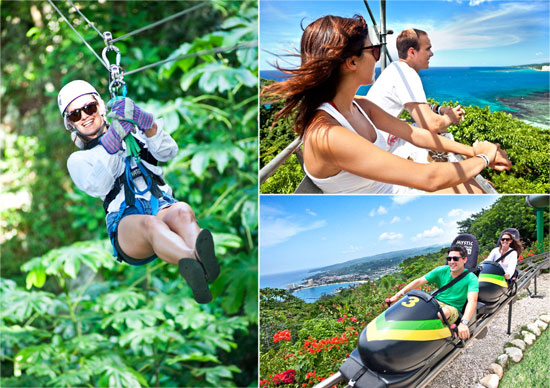 Jamaica continues to boast some of the finest attractions in the Caribbean, which tourism stakeholders say have been acting as major pull factors in attracting cruise and stopover visitors.

This, they also note, has been contributing to businesses all around, where tourism interests – craft traders, transport operators, restaurant owners and hoteliers – are benefiting.

“The cruise lines will tell you that Jamaica has some of the best attractions in the world,” says Senior Adviser and Strategist in the Ministry of Tourism, Delano Seiveright, in an interview with JIS News.

“Dunn’s River Falls, as the Caribbean’s biggest attraction, is the one that readily comes to mind. It is arguably one of our biggest pull factors and a major hit with cruise visitors, scores of whom return with their families to the island for longer stays,” he says.

Dunn’s River is a State-owned entity which is operated by the St. Ann Development Company (SADCo), a subsidiary of the Urban Development Corporation (UDC).

While a favourite for film-makers and adventure seekers, what makes the Dunn’s River experience so unique is that guests can climb from the beach, passing many coves, lagoons and pools as they make their way to the peak of the falls.

Guests are led by professional and well-trained guides who adhere to all safety policies throughout the entire climb. There is also an option to climb or simply admire the attraction’s scenic beauty and ambience.

Mr. Seiveright says that in addition to Dunn’s River, there are Chukka, Dolphin Cove, Mystic Mountain, and Good Hope, and rafting on the Rio Grande and Martha Brae rivers.

“It is a fact that many cruise visitors come back for a longer stay so as to experience the allure of Dunn’s River and the other attractions,” he tells JIS News.

“What is so beautiful about these experiences is that all the resort towns have their own attractions with their uniqueness… which adds variety to the tourism product,” Mr. Seiveright says.

For his part, Mayor of St. Ann’s Bay and Chairman of the National Cruise Council (NCC), Michael Belnavis, says Jamaica has learnt valuable lessons from places like Orlando, New Orleans and Miami Beach, in that attractions by themselves “can bring loads of visitors” to the destination.

“We have seen the boost in tourist arrivals in the destinations that are attraction-driven,” he points out.

“Look at the Disney experience in Orlando and Busch Park in Tampa… both in the state of Florida. There is also Bourbon Street in New Orleans and also the round-the-clock Miami Beach experience. There is empirical evidence that people make their annual pilgrimage to these locations because of the attractions,” Mr. Belnavis says.

He adds that with the expected boom in tourism over the next two years, where both cruise shipping and stopover arrivals “should be going through the roof”, there is room for even more attractions.

He says there are plans for even further development at Dunn’s River, a move which is aimed at broadening the attraction’s appeal and cementing its status as one of the biggest and most popular attractions in the western hemisphere.

The major cruise lines too have been so impressed that some of their officials have been publicly pushing Jamaica to continue using the attractions as pull factors to entice and lure guests back to the island for longer stays.

President of the Florida Caribbean Cruise Association (FCCA), Michelle Paige, at a recent forum hosted by the Montego Bay Chamber of Commerce and Industry, said that the destination that packages its tourism offerings to suit the needs of the visitor is more likely to do better than those who do not.

“A happy cruise passenger will not only spend money but will more likely than not come back for a longer stay. My association is fully aware of the many passengers that have returned to your beautiful country because of the world-class attractions,” she told the business forum.

Meanwhile, Ravi Daswani, a Senior Director of the Royal Shop, Montego Bay, one of the nation’s leading Duty Free Shopping chains, tells JIS News that the duty-free sector has also been doing its part in bringing visitors to the island.

“From a duty-free standpoint, we are also an attraction. When it comes to jewellery and precious stones, very few places in the world can compare. Selection and price is what makes us such an attractive shopping destination,” he tells JIS News.

Mr. Daswani says that with the duty-free status, prices can be as much as 20 to 40 per cent below the full retail price when compared to the United States and Europe.

“This positive shopping experience, where you can get the diamonds and the Rolex watches, accounts for the large percentage of customers who come back year after year,” he adds.

OTI's New GM Steve Tyson Enhancing Its Reputation As A Piece of Paradise!