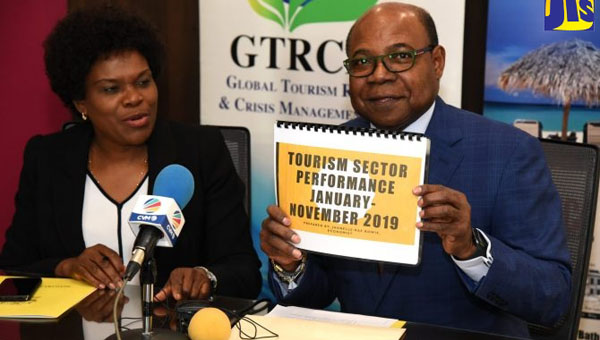 Tourism Minister, Edmond Bartlett, says a preliminary report, from the Jamaica Tourist Board (JTB), is showing that in 2019, the sector earned between US$3.7 billion and US$3.8 billion, some US$500 million more than in 2018.

Speaking at a January 15 Press Conference, Bartlett said stopover arrivals for the year grew by eight percent, and described the industry’s performance as “spectacular and exciting”.

“The measure of tourism is both arrivals and earnings, but the most powerful part of it is the earnings, which have increased by US$1.8 billion in just over three years,” he exclaimed.

Bartlett argued that the continued growth in tourism results from the setting of targets, which he did, after assuming office in 2016.

He reported that the country has already outperformed, by 2,000, the projection to have 127,000 persons employed in the sector by 2021, and that all the other targets are almost reached.

“The best part of our success is in the retention increase that we have had in the dollar,” the Tourism Minister said, explaining that in 2016, Jamaica was retaining 30 cents on every dollar earned in the industry, but it is now at 40.8 cents, a 30 percent increase.

He related that the government moved quickly to ensure an end to the seasonality of tourism, and to make it an all-year activity that provides employment security to workers.

Bartlett emphasised that growth in the sector is not just for the administration, “It is the result of the stakeholders, the hoteliers and the little worker.”

The Tourism Minister disclosed that the pension fund for tourism workers was one of the targets he set, and on January 20, the evaluation for fund managers and fund administrators will be completed.

He pointed out that the hoteliers have been “responsive” to the pension scheme, and they are eager to know the precise date of commencement, “so that they can plan their cash flow”.

Bartlett added that in the coming weeks, ground will be broken for another 7,000 hotel rooms, adding that some 3,000 houses are under construction, “primarily focusing on workers in the tourist industry”.