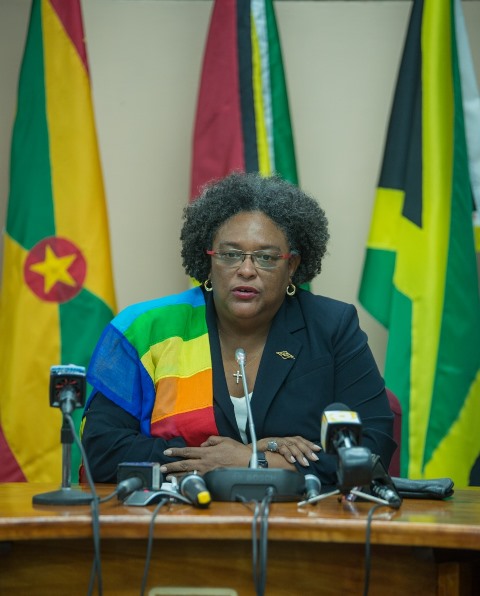 As she wrapped up a one-day visit to Guyana in which she received Guyana’s second-highest national award, the Order of Roraima, met with both the President and Opposition and the Private Sector, Barbados Prime Minister, Mia Mottley, is adamant that regional integration needs to be carried and sustained.

Prime Minister Mottley said this is to ensure that others also benefit in the future.

“It is like carrying a baton in a relay race, this race started decades ago, what is up to us now is to be able to carry it in a way that will benefit the majority of our people,” Prime Minister Mottley said. Adding that leaders have to work on perfecting the CARICOM, Single Market and Economy.

“The standards issues continue to be with us, the completion, the perfecting of the CARICOM Single market and Single Economy, which we are working hard on and which we are interacting and interfacing with member states, as well as the regional institutions; legal affairs committee, council of finance ministers etc. to be able to bring it to a closer those agreements that will allow for greater investment activities in the region.”

The Barbados Prime Minister wants a passport-free movement between CARICOM countries. She said by removing all obstacles it will be easier for Caribbean people to transit for work especially.

During her tenure as Chair of the Caribbean Community, (CARICOM), Prime Minister Mottley plans to tackle issues such as Economic Diversification and Climate Change.

The Caribbean Community/ CARICOM’s primary objectives are to promote economic integration and cooperation among its members, to ensure that the benefits of integration are equitably shared, and to coordinate foreign policy.