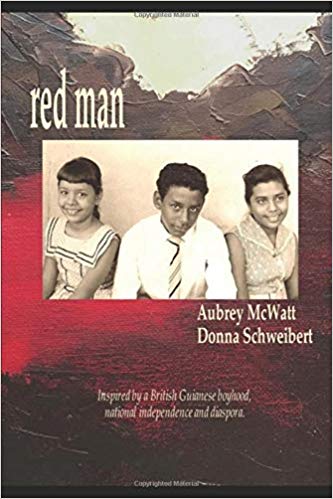 Guyana born Aubrey McWatt has announced the publication of his much anticipated novel Red Man. Copies of the 381 page novel are available online athttps://www.amazon.com/red-man-Aubrey-McWatt/dp/1672825482/ref=sr_1_fkmr0_1?keywords=schwiebert%20redman&qid=1580779649&s=books&sr=1-1-fkmr0&fbclid=IwAR2o_rGGuuA4pLSLVk10tjCfDr_9r_0hM5aDw930WaeMn1Y2sDpi6gXV0t0

Red Man tells the story of Max Mcnight, a young boy from British Guiana who grows into adulthood during the tumultuous years of political unrest from 1946 to 1966. From the unionization of the sugar, rice and wharf workers that lead to a communist scare, to the rejection of national autonomy from both British and Guianese industrialists, Max’s father attempts to maintain a sense of normalcy for his family in a country that is moving steadily toward collapse. The idyllic British colony, the “Land of Many Waters,” ultimately deteriorates into brutal violence, suppression of civil rights, riot, murder, and invasion by Britain at the behest of the United States. Max eventually discovers for himself the end result: the death or disappearance of families and friends that he knew well growing up. His dream of growing old in the land of gold and diamonds becomes impossible, and his new life begins as a stranger in a foreign land.

Aubrey McWatt was born in Georgetown, British Guiana on August 3rd, 1943. He is of European, Native American, African and Lebanese descent. He is multilingual and has lived and worked in seven countries on three continents.

McWatt is a Canadian citizen and a permanent resident of the United States. He graduated from Queen’s College in British Guiana, has a BA equivalency from Columbia University in New York and studied at
the Wharton School of Business in Philadelphia, PA. He served a 30-year business career in pharmaceutical marketing at Merck & Co. Inc.

After retiring, McWatt studied visual arts at the Seattle Academy of Fine Art and has published his artwork and poetry in the books:
Poetry and Painting – Creating Connections
Moments in Time – Drawings of Life and Nature
Paintings and Sculpture – A 50 Year Retrospective